EBED is pleased to announce that Joan Bennett has joined the charity as National Youth Coordinator.

Joan - a former winner of the Tom Bradley award - has been a driving force in junior bridge for the past few decades. She brings her talent and knowledge to EBED in what has been a very difficult time for junior bridge, with schools and universities dealing with Covid for well over 12 months now.

Building on the recent successful Young Bridge Challenge, Joan will work towards reshaping the network of volunteers active on the ground, with the aim of restarting bridge activities in schools and universities when the next academic year starts.

Joan joins EBED on a voluntary basis and she will be working one day per week, on Wednesdays.

Andy Margetts (EBED’s Chair) commented “All of us at EBED are immensely grateful to Joan and extremely pleased to welcome her to the team.”

If you are active on the youth front, or would like to get involved and want to get in touch with Joan, she can be reached at joan@ebedcio.org.uk

Eighty-one players – from the Isle of Wight to Glasgow – fought hard over five hours to win the sought after trophies. The participating teams began with four rounds of Swiss Teams Qualifying. The leading four teams eligible for the Schools’ Cup (team members all from the same school) transferred to a Knock-out format for the Schools’ Cup whilst the remaining teams continued to compete for the Harry Scully Trophy and the School's Plate.

The final places for the School’s Cup were:

More importantly, everyone had a good time; from beginners to internationals, from primary school children to sixth-formers, it was a great day of bridge.

The event was organised by English Bridge Education and Development.

Giorgio Provenza, EBED CEO, would like to personally thank Steve, Rob, Gordon, Stuart, Duncan, Tom, Caroline, Sarah, Helen, Ann, Holly, Linda, Julia, Sammy. Without their help this event would not have been possible.
See you all next year!

You can read more about the event and see results here

Teach Minibridge From the Comfort of Your Own Home 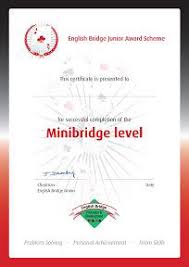 With the current circumstances in our lives, you might be looking for something to do with your fellow family members.

Do you have any young family members or know of any friends who do? Would they be interested in learning minibridge?

You will be provided with some resources and materials that can help teach minibridge to young people. You will also be given full support and coaching remotely! What a time to teach young people the foundations of our beautiful game!

Please get in touch with us here or e-mail info@ebedcio.org.uk for more information.

The Young Bridge Challenge took place in Loughborough on Saturday 7th March with young players enjoying an afternoon of bridge and minibridge competitions.

The participating teams began with four rounds of Swiss Teams Qualifying. The leading four teams eligible for the Schools’ Cup (team members all from the same school) transferred to a Knock-out format for the Schools’ Cup whilst the remaining teams continued with two further matches in the Swiss Teams. In the semi-finals, Haberdashers beat St Paul’s School by 20 IMPs, and Loughborough Grammar School beat Exeter Maths School by 9 IMPs.

The Harry Scully Trophy was also a competitive affair with many teams chipping away at last year’s holders. In the end, Jamie Fegarty, Liam Fegarty, Jasmine Bakhshi and Henry Rose (here) retained the trophy again. The next highest school team were Joss Davis, Adrian Dimitrov, George Justice, Thibault Crosnier (here) of Loughborough Grammar School A. They won the School’s Plate and gave the Harry Scully winners their only defeat of the competition.

The event was organised by English Bridge Education and Development. Thank you from all involved to Loughborough Grammar School for hosting the event.

Entries for the Young Bridge Challenge is open.

The Young Bridge Challenge is a historic annual schools cup competition hosted by EBED. It is a one-day bridge event for school-aged players of all experience levels. The day will consist of numerous competitions including:

♠ Qualifying rounds for all teams (Swiss)
♥ The top 4 teams (who must be from a single school) then play Semi-Finals leading to the Final for the Schools Cup
♦ Swiss Teams - The Remaining teams play for the Schools Plate (for teams from a single school) and the Harry Scully Trophy (for mixed school teams)
♣ Minibridge/Pairs duplicate for accompanying novices and adults.

More information including the online entry form can be found on https://www.ebedcio.org.uk/ybc. It is completely FREE to enter, and entries of single players or pairs are also welcomed.

If you have any questions, please do not hesitate to contact Stephen Hull via e-mail stephen@ebedcio.org.uk. You can also phone 01296 317228.

We are pleased to announce that Richmond Junior Bridge Club will run on the 2nd & 4th Sunday of each month! They opened on 15th September with 19 juniors who will be enjoying the game under the supervision of kids supremo Julia Davies and her team of fantastic volunteers. Please do tell friends and family about this new initiative. Please contact Richmond Bridge Club if you would like to attend any sessions but of course, you can just turn up if you would like to.

York Bridge Clubs’s first Taster Starter Bridge session at Lord Deramore's Primary School, Heslington, York. They had 3 one-hour wonderful, rewarding and fun sessions with 95 very enthusiastic eight, nine and ten year olds. Was very much enjoyed by all. Thank you to Mr Richards for inviting the club and its equally enthusiastic buddies into their school. Well done!

Letter There Be Love

Four students who attended Dr Challoner's Grammar School wrote a lovely bridge related letter thanking Nigel Thompson and Tony Aston who excellently run the bridge club at the school. Many thanks to the four junior bridge wordsmiths: Josh Robey, Zach Yarrow, Louis Southwell, Freddie McCallum who have since left school and gone on to attend different universities around the country. We really hope to see them on the bridge table in the future!

The England U16 team competing in the 2019 World Bridge Federation Youth Online Championship, have finished top of the table, 10 VPs ahead of China in second place.

NPC Giorgio Provenza has written a new blog, with updates on the U16 squad's progress throughout and what's next on their journey. You can read it below.

I can’t believe it’s been almost 10 months since the last time I have been in touch.

At that time, we were on our way back from China, having competed in the U16 World Championship.

A lot has happened in the meantime; half of that team has outgrown the category – Andy, Liam and Oscar have now moved to the U21s, where they keep proving their worth.

Our squad has added many new recruits and it consists now of about 20 girls and boys.

Back in March we started competing in the 2nd WBF Youth Online Championship. Those who have been following us might remember that last year – in the very first edition of this competition – the team won the silver medal, losing in the final only to the mighty Chinese team.

Eight kids have been selected to play this event:

Nineteen teams from four continents are taking part and the first stage consists of seven 14-board matches, after which the first eight teams progress to the K.O. stage.

The team have been absolutely brilliant, winning all their seven matches and topping the table, 10 VPs ahead of China in 2nd place. We are now waiting to know the opponent for the quarter finals.

If you want to see them in action, this is the link to the last match we played, against the USA.

Some information about this event can be found on the World Bridge youth site. I warn you though, the website is not updated regularly!

Another big event awaits us this summer; in the 2nd week of July we will be heading to Norway for the European Championship, where we will try our best to qualify for next year's World Championships. The team for Norway can have a maximum of 6 players; the top three pairs listed above have been selected.

Preparation for it is well under way. The team played the Spring Foursomes back in May – courtesy of a generous donation – and will meet again face to face in London at the end of June, when we will be guests of Andrew Robson's Bridge Club. If all of this, plus online training, plus school exams, plus the other commitments these kids have (it is not just bridge they are good at) wasn’t enough, they have also taken upon themselves the task of promoting the game of bridge among other young people.

They have been running school assemblies, writing in the school’s newsletters, teaching in their schools’ bridge clubs.

They have even been approaching local and national papers asking to cover their stories. This is an article that has recently appeared in a couple of papers in the SW London area.

They are also planning to set up a Facebook page to upload videos before and during the Norway campaign, all with the goal of showing other kids how much fun the game of bridge is.

And it doesn’t end with Norway!

Five of the six kids who will be playing in the Euros will be over age next year. So the team for 2020 is work in progress.

The very weekend we fly to Oslo, the rest of the squad will gather for a weekend of training, where Meena Samani and Helen Erichsen will put their skills at the service of the talents of the new rising stars of English junior bridge.

The squad will be joining the Southern Counties Junior Camp. It’s an event open to any junior of any ability, including minibridge. And it’s not too late to sign up for it. If you know anyone who could be interested, please direct them to the SCCBA website and they may be the next Andrew Robson!

Another great event for junior players is the Junior Teach-In at the end of August, organized by EBED. More info here. It’s the perfect way to finish off the summer!

We will be there and scouting for new talent. Last year’s Junior Teach-In was where I first came across Kim Hudson. At that time, she had barely played any duplicate club bridge and nine months later she is part of the team.

Who wants to be next?

Find out more about Bridge for All, the national learning programme developed and promoted through English Bridge Education and Development (EBED).
Read More