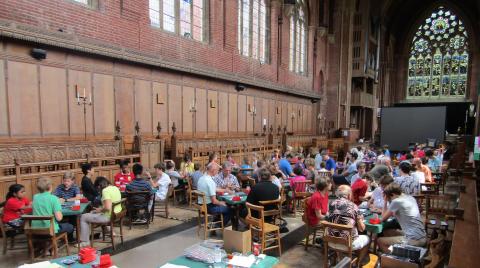 The hottest days of the year didn’t stop 63 juniors aged 7 to 21 from playing bridge almost non-stop at the Southern Counties Junior Bridge Camp at Ardingly College on 7th and 8th July. The Chapel made an impressive venue for the competitions - have we found a new use for redundant church buildings?

Highlights included a 3 way tie for first place in the Priday Cup, won by Oscar Selby and Andy Cope from Jamie and Liam Fegarty on the result of the boards played against each other, and the master-class on high level competitive bidding by Espen and Helen Erichsen. Dominic Cooke and William Clennell won the NS Saturday evening pairs, and Henry Rose and Jasmine Bakhshi the EW. The Ratnesan family made a clean sweep of the novice competitions, with Radha winning on Saturday together with Eliska Whitney, and Rajeiv and Ranesh on Sunday.

Four brave girls opted to play rounders in 30 degrees of heat, but most juniors and adults opted either to use the swimming pool or (after a rapid programme alteration) to watch the World Cup football. We wish the England U-16 team, who used the event as their final training, the best of luck at their World Cup in August, and for the final of the World Online Championships!

To experience some of the same kind of fun we had at Ardingly, come to EBED's Junior Teach-In, from the 31st August to the 2nd September at Phasels Wood Activity Centre in Hertfordshire.