This is a great opportunity to immerse yourself in bridge and start playing quickly. The event is supported by EBED, and is free to those in full time education or those prepared to help with school clubs - for others the course will cost £99. 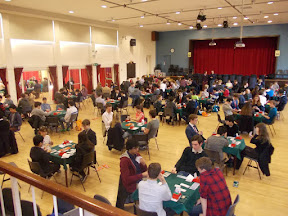 Over 100 junior players took part in the Young Bridge Challenge in Loughborough on 5th March. Haberdashers' Aske school, from north London, won the main event, the Schools Cup, for the seventh consecutive year.

This was a third victory each for the members of the HABS team, and came at the end of a busy and very enjoyable day of bridge for all involved.

Thanks to Loughborough Grammar School for hosting the event, and to all the volunteers who made the day such a success.